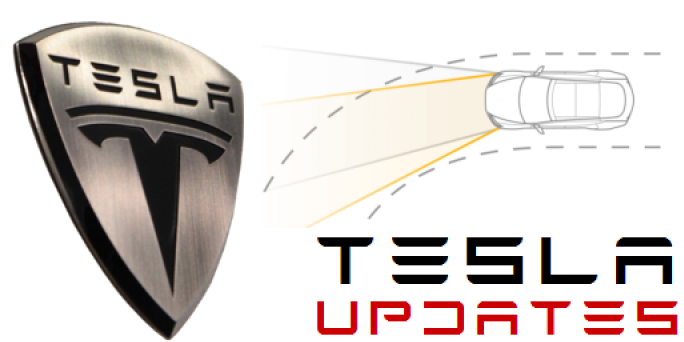 Elon Musk’s electric-car company Tesla sent its cars a software update that suddenly made autonomous driving and self steering a reality.

In October 2014, Elon Musk’s electric-car company began rolling out sedans with a dozen ultrasonic sensors discreetly placed around both bumpers and sides. For an additional $4,250, Tesla customers could purchase a “technology package” that used the sensors, as well as a camera, a front radar, and digitally controlled brakes, to help avoid collisions—essentially allowing the car to take over and stop before crashing. But mostly, the hardware sat there, waiting, and gathering reams of data. A year later, on October 14, the company sent a software update to the 60,000 sensor-laden cars it had sold in that time. The software update was officially named Tesla Version 7.0, but its nickname—Autopilot—was what stuck.

It did in fact give drivers something similar to what airline pilots employ in flight. The car could manage its speed, steer within and even change lanes, and park itself. Some of these features, like automatic parallel parking, were already on offer from other car companies (including Mercedes, BMW, and General Motors), but the self-steering was suddenly, overnight, via a software update, a giant leap toward full autonomy.

Tesla customers, delighted, posted videos of themselves on the highway, hands free, reading the paper, sipping coffee, and even, once, riding on the roof. Some of these are, it’s worth pointing out, illegal acts. Autopilot existed in a legal gray area,  but it was a grand gesture toward an ever nearing future, one that will reshape not just the car and our relationship with it but the road and our entire transportation infrastructure.

The car can’t start in Autopilot; it requires a set of circumstances (good data, basically) before you can engage the setting. These include clear lane lines, a relatively constant speed, a sense of the cars around you, and a map of the area you’re traveling through—roughly in that order. L.A.’s abundant highway traffic is the ideal scenario for Autopilot, not simply because of all the data it makes available to the ultrasonic sensors—which use high-frequency sound waves to identify objects up to 16 feet away—but also because humans are awful in traffic. We are bad at estimating distances to begin with, and we are constantly trying to switch lanes when the next one looks faster, causing accidents in the process.

With its incremental approach, Tesla stands in contrast to Google and other companies that have small test fleets gathering data in hopes of someday launching fully autonomous cars. For Tesla, its customers and their partially autonomous cars are a widely distributed test fleet. The hardware required for true autonomy is already in place, so the transition can play out in software updates. Musk has said that could be technically feasible—if not legally so—within two years.