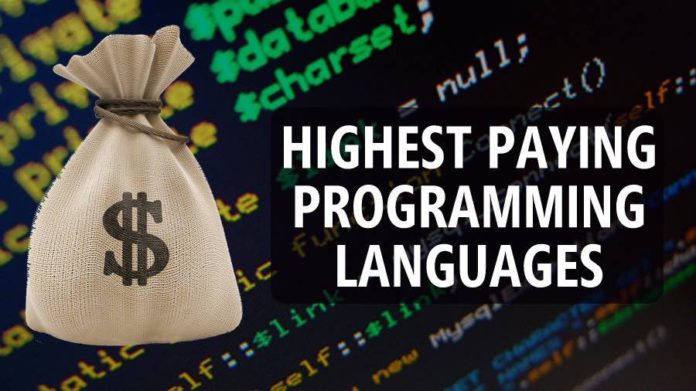 As the ever-expanding world of technology continues to grow in its reach, so too do the various jobs, skills, and programming languages. Since the dot-com bubble of the 1990s and early 2000s, we’ve seen a great proliferation of various programming languages, and that growth shows no signs of slowing. Indeed, some lists suggest there are close to 300 different languages one can learn. It’s no secret that coding skills are highly sought after and often very well compensated in the workforce, but no one can learn every language, and some skills are more valuable than others. As the tech industry continues to evolve and progress, it’s important to know how to choose a programming language to learn, what the best way to learn that language is, and how your choice might affect your employment future.

One key consideration, as with any job, is the salary you can expect after you’ve picked up your new skill. With that in mind, here are the fifteen highest paying programming languages for 2016:

With the motto “Write once, run anywhere,” Java has become a nearly ubiquitous concurrent language that can run on just about any platform imaginable, meaning developers who have mastered the language are always in high demand. Senior level Java developers can often expect salaries as high as $115,000.

A highly versatile and very readable language, Python is used heavily by major players in the tech industry, such as Google and NASA, and senior-level Python developers can easily fetch a $100,000+ salary.

Otherwise known as GNU S, the R programming language is specialized for statistical computing and graphics development. Widely used by data miners and statisticians for data analysis, R can fetch some very high salaries exceeding $100,000, because the language is so specialized.

A modernized upgrade to its predecessor C, Objective-C is the main language used by Apple to develop its OS X and iOS platforms. It is used heavily by Apple for their APIs, Cocoa and Cocoa Touch. Because of Apple’s reliance on the language, Objective-C can fetch top-notch developers a salary that is close to six figures.

A relatively new language on the market as a streamlined companion to Objective-C, Swift has exploded in popularity recently as the main programming language for Cocoa and Cocoa Touch, Apple’s frameworks supporting iOS, OS X, watchOS, and tvOS. Demand and salaries are still on the rise for this young language, and Swift’s affiliation with Apple means a skillset that includes this language could easily earn six figures in the near future.

Developed by Microsoft and part of the foundational family of C programming languages, C# (pronounced “see sharp”) is known for its simplicity and wide general usage. C# developers can easily earn a solid $90,000+ in salary.

As one of the three main technologies for World Wide Web content production, it should be no surprise that JavaScript developers are among the most in-demand on the market. Whether it’s running a website on any browser without the need for plugins, implementing site-specific browsers or developing desktop widgets, there’s always work for a JavaScript developer. A senior JavaScript developer can typically expect a salary of at least $90,000.

Technically a family of related languages, Perl is generally known best as a popular CGI scripting language and is also used for graphics programming, system administration, and even some financial applications. Salaries vary based on the specific use, but Perl’s versatility means its programmers are always in high demand and can often expect a salary of no less than $80,000.

Another member of the famous C family, C++ is best known for being an efficient and flexible language that is used to develop large systems such as desktop applications and server platforms. A very well-known and reliable language, C++ can often fetch its developers a salary of at least $80,000.

Short for Structured Query Language, SQL is a special-purpose language whose main function in development is managing the data in databases and data streams. It has grown widely in popularity recently and can demand salaries well into the $80,000 range.

Also known simply as “Rails,” Ruby on Rails has earned a very respectable reputation in recent years for its popular default structures for databases, web services and web pages. A Ruby on Rails job can consistently haul in a healthy salary of $75,000+.

Famous for the original “Hello, World!” program, C is one of the bedrock languages of modern computing and remains an incredibly useful language for efficiently mapping machine instructions for applications and operating systems. As it’s one of the most widely-known languages of all time, C developers are always in high demand, with salaries typically ranging anywhere from $60,000-$80,000.

Most often used specifically for server-side functions like web development, PHP has grown tremendously in popularity in recent years. Its web-facing features make it a highly-demanded skill, and PHP developers can easily claim salaries of over $75,000.

Short for Transact-Structured Query Language, T-SQL is closely related to its predecessor, SQL, serving as the main line of communication with the SQL server for any application’s user interface. T-SQL is a very specific language that requires a certain skillset, so while it may not be in as high demand as some other language, specialists still get compensated well for mastery of the language and can pull in an average salary of over $70,000.

Not to be confused with Ruby on Rails, Ruby is a sophisticated, modernized take on classic languages like C and PERL that emphasizes simplicity through natural syntax and easy-to-read code. Its broad appeal means even entry level developers can fetch salaries pushing $60,000, and senior level developers can earn salaries close to six figures.

It’s well documented that there is a shortage of top tech talent in the market, so no matter which of these highly lucrative languages you choose to tackle, you can’t go wrong. Start mastering one of these languages now and rest assured that your skillset will be in high demand.

Read more about in demand programming languages of 2016.

Things only Programmers will understand