The first step in building your very own Google Cardboard Virtual Reality Headset is choosing the type of cardboard to use. The official Google site https://www.google.com/get/cardboard/ says you should use cardboard that has a thickness similar to that of a “sturdy shoe box.” Studying the official press photos showing the Cardboard viewer that Google gave away, it appeared to me that the cardboard is, indeed, thinner than the kind typically used for boxes for packaging computers, electronic gadgets or kitchen appliances, but sturdier and thicker than the rigid paperboard of the average shoebox.

A used take-out box for a large-sized pizza is a perfect solution.

You’ll also the need the following parts to build your Virtual Reality Headset:
Precision Knife, Scissors, two magnets: One is a ceramic disc kind; the other is a metal ring disc. Both are super strong magnets (especially the ring one), available at Home Depot. The ceramic disc magnets is around $2 for an 8-pack, and the ring magnet in a 3-pack for $3.98.

Two adhesive Velcro fasteners, a rubber band and the lenses: Google recommends 45mm focal distance asymmetric biconvex lenses. You probably won’t find these for sale at a hardware store or general retailer near you. I found some at Banggood.com for 89 cents each (don’t forget to buy two), but you’ll have to wait 7 to 20 business days for shipping. If you want them faster, you’ll likely have to pay a lot more. I found some at Amazon for $10 a pair plus $8 shipping. 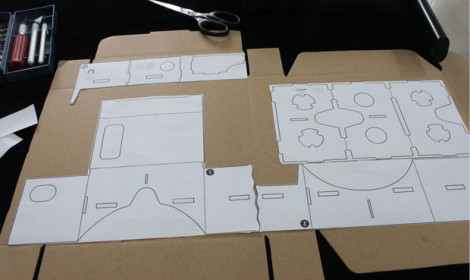 To start, print the PDF templates for the Cardboard viewer parts onto three 8.5-x-11-in. paper sheets. It’s broken up into three parts on the printouts, and you have to join them together into one as I’ve done here. The second major template is for the Lens Holder and the third is for the Vertical Divider.

Step3: Join the pieces of the viewer case.
Gray lines marked on the template show where you make a fold on the corresponding cardboard part. So, using the precision knife and a ruler, lightly score these parts of the cardboard and fold out the cardboard along the scored line, and then folded it back in along the line.

A tip for cutting the Lens Holder: 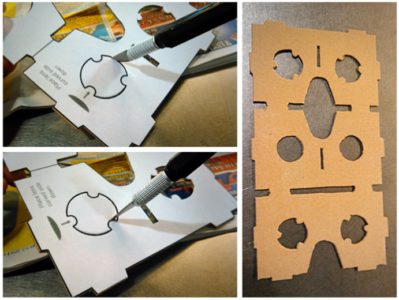 Use the precision knife to cut through the three outer curves first in these circular patterns (top left) and then cut the three inner curves next (bottom left). This will make removing these interior openings easier than trying to cut them out in a single clockwise or counter-clockwise path.
On the right is the lens holder fully cut out from the pizza box without the template paper.

Putting it all together: 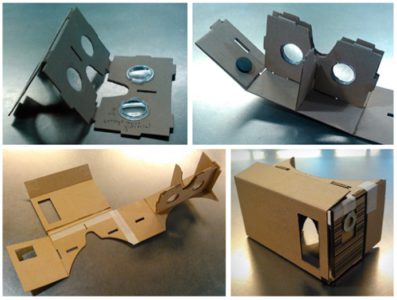 Bringing the three pieces together is fairly straightforward: You insert the lenses into the Lens Holder which you then fold upon itself like a flattened “N.” (Top left)

Next you place the tabs on the top of the Lens Holder (the edge opposite where the nose cutout is) into the corresponding slots on the Viewer Case. Then brace it all by sliding the Vertical Divider’s tabs into the appropriate slots on the other two pieces (upper right).
After that you just keep wrapping the Viewer Case around the Lens holder (lower left), inserting tabs into slots as you go along.

Google’s official Cardboard kit included a piece of double-sided tape to hold the left flap of the Viewer Case into place, thus securing the entire thing together. But that fancy stuff is expensive! As you can see in the lower right photo, I found the masking tape to be just as effective. 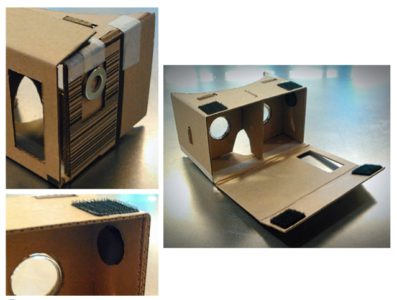 To finish out my snazzy new Cardboard viewer, I added the magnets, the Velcro and the rubber band.

The two magnets are used to create a sliding switch mechanism. You place the ring magnet in a certain spot on the outside of the viewer (upper left photo), and the ceramic disc magnet goes in the same spot on the inside of the viewer (lower left photo). The inside disc magnet stays in place, but you can slide the outside ring magnet down with your finger, which magnetically triggers functions in a Cardboard app running on the Android phone inside the viewer. When you let go, the ring magnet will slide back up because it’s drawn by the magnetic pull of the inside disc magnet.

The two magnets stick to one another through the cardboard via their magnetic attraction. If you have small children, it’s a good idea to glue the inside disc magnet in place as a precaution against the magnets coming off and becoming a choking hazard. That said, I did not glue the inside magnet to the cardboard. The magnets are mighty strong and they’ve never detached from the viewer as I’ve used the switch.

The Velcro fasteners hold the viewer’s “back door” in place once you’ve put a Smartphone inside it (right photo). Each piece of Velcro has adhesive; just peel off the backing and stick it on.

The rubber band is used to keep your Smartphone from slipping out of the viewer. You stretch it across the fold that acts as a hinge for the door (also shown in the right photo). One side of the Smartphone rests against it, and the rubber material is supposed to provide extra friction to prevent the device from sliding out when you’re moving the viewer around.
The adhesive NFC tag (not pictured) is simply for convenience. It automatically triggers the Cardboard app when you place your phone into the Cardboard viewer so you don’t have to start the app manually before placing the phone into the viewer. If you choose to add an NFC tag, you stick it along the bottom of the Cardboard viewer or the side opposite from the magnetic switch.

Welcome Message When User Logs In